Work hard, play hard! The Takken’s 200 Series Dual Cab by Rambler Vehicles can do both with ease! 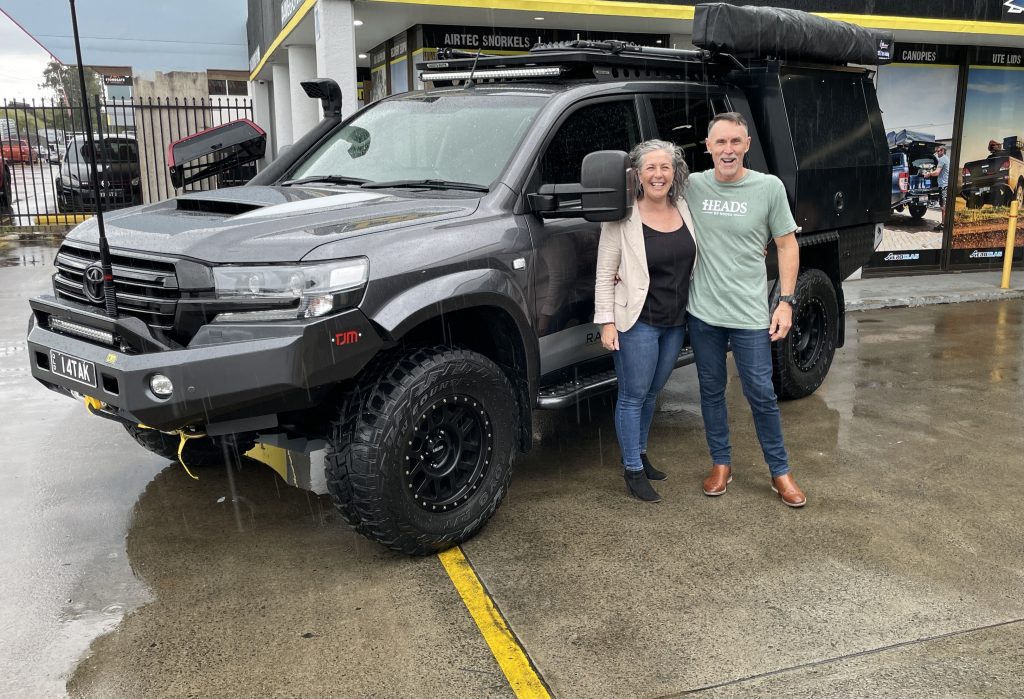 When Karen and Darron decided it was time to take the foot off the pedal that was work and start to bring a little more balance into their lives, making memories was high on the agenda. They have worked hard all of their lives and figured they had earned a bit more play time. Of course if you’re going to play you need toys, and the Rambler Vehicles 200 Series Dual Cab is one hell of a plaything!
Karen told us, “we love that the Rambler isn’t just another cookie-cutter build. The team took the time to listen to what we wanted, and they delivered exactly that! It’s time for us to hit up as many beaches as we can and make those memories”!
Let’s take a closer look at what makes this memory maker so special.

Even at just a glance, you know that this Rambler Vehicles 200 Series dual cab finished in stunning Graphite is special. Really special. It starts with the obvious – the dual cab conversion. What the Rambler team does is take a supremely comfortable off-road vehicle in a 200 Series wagon, and lop the back off courtesy of the team at ASG 4×4 to make it a far more functional vehicle for travelling to remote regions in comfort. While the conversion was taking place, Kris and his team also took the opportunity to add a further 350mm to the chassis (which is all legal and nationally certified) so that when it came time to fit the custom-built Spinifex Manufacturing canopy body, they could squeeze a much bigger canopy on to the chassis safely. With a build of this magnitude, it really does pay to think ahead!

With a lot of the touring planned to take in places like Fraser Island and the like, the choice was made to bypass the bigger style of bullbar up front, and instead a classy TJM Venture bar was colour-coded and fitted. We reckon it complements the lines of the 200 Series perfectly! TJM Side steps are as tough as they come, so they got the nod, and the Rambler team also modified them by lengthening them to suit the new body shape.

Should the need for recovery ever arise, a TJM 12,000lb winch has been installed up front, along with the subtle yet effective Lightforce LED driving light, tucked away neatly under the small hoop on the Venture bar.

Moving up to the roof you’ll find a Rhino Rack platform that houses yet more handy additional gear such as the folding aerial mount for the built-in CelFi Go unit, a pair of Maxtrax and a long-handled shovel. There is also a solar panel mounted up top to help keep the batteries topped up on the extended beach stays.

Those with an eye for detail will have also spotted the great-looking and highly functional Legendex stainless snorkel, along with the almost obligatory Clearview power fold mirrors.

The icing on the cake is the stunning Graphite paintwork that has been given the Quartz Paint Protection treatment, and a set of always classy Rambler Vehicles decals, that the customer modified to suit their own tastes. 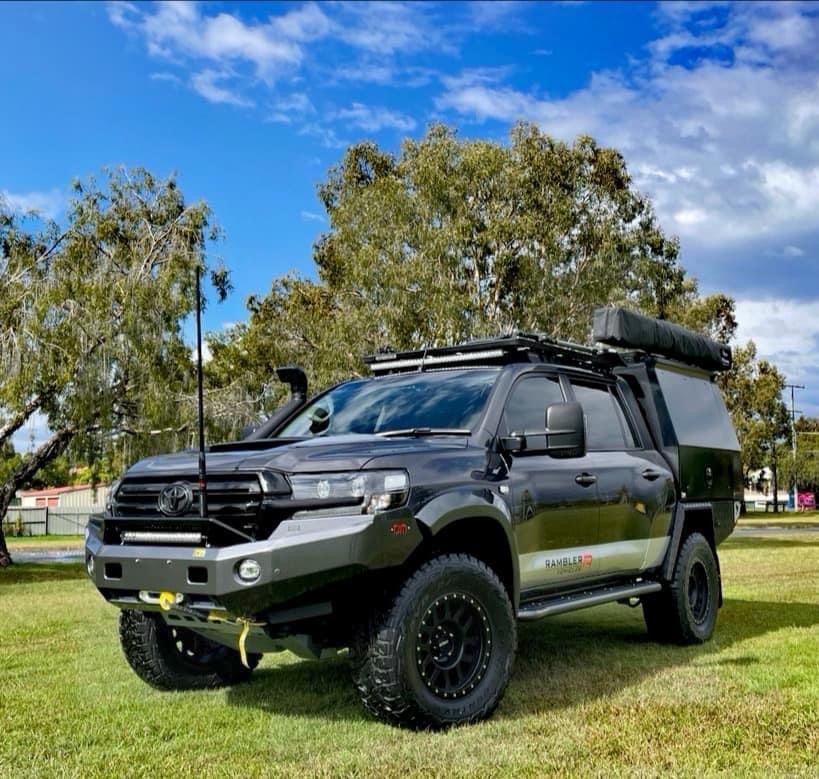 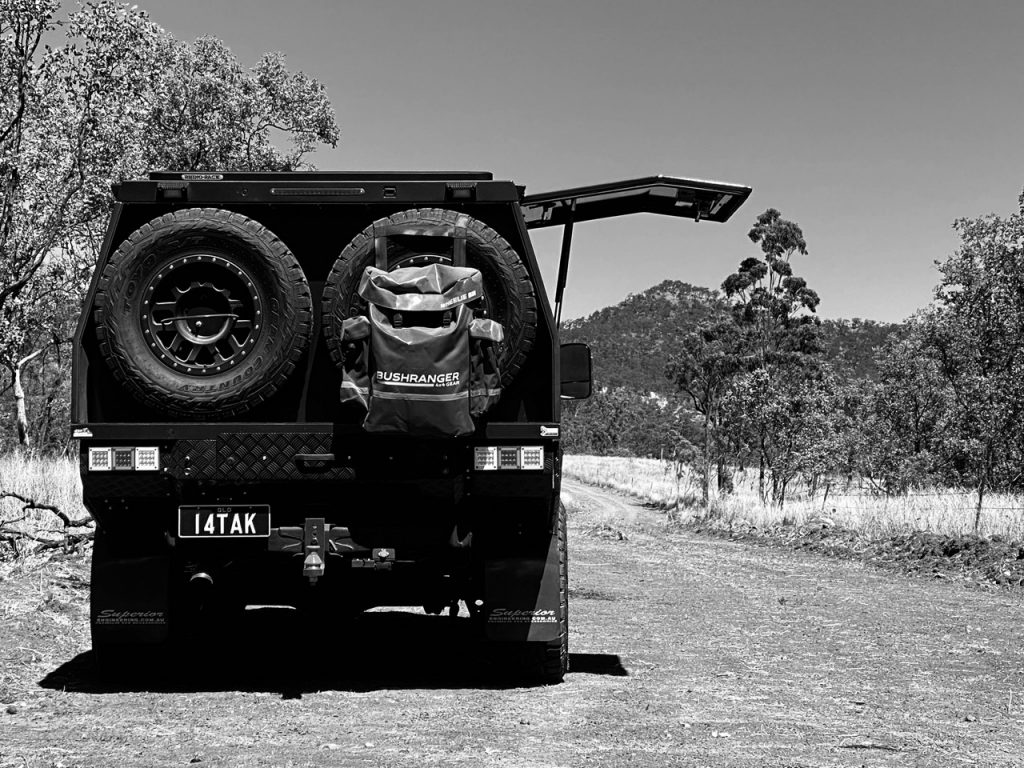 It’s fair to say that the typical Rambler Vehicles client is pretty discerning, and with that being the case, it comes as no surprise that this Rambler dual cab has been fitted up with a quality Spinifex Manufacturing custom canopy. As with every aspect of a Rambler build, the canopy is custom built to suit the client’s exact requirements, and Kaz and Daz are over the moon with the result.

On the driver’s side is where you will find plenty of room for storage, along with an RV Storage Solutions storage drawer. There is ample room for fold-up chairs, tools and almost anything else you might want to take away with you for an extended trip. The passenger’s side is where the good stuff lives!

Up front the is a cavernous 130L Bushman upright fridge/freezer that would swallow enough tucker and tinnies to feed a footy team! Moving right along you’ll spy the heart of the canopy, the Spinifex Manufacturing “Explorer 1 Power System”. Hand assembled right here is Australia, the Spinifex Explorer 1 features the solar management system, the battery management system and in inverter, plus more outlets than you could point a stick at! It takes care of the lot. There is also a Spinifex LED lighting system that features a choice of either bright white or a clever orange hue that doesn’t attract as many creepy crawlies after dark.

The star of the show, and Karen’s favourite part of the 200 Series is the awesome slide-out pantry and kitchen! It means that no matter how late the family gets into camp, a feed can be on the go in no time, with a minimum of fuss. The clever slide-out drawer under the upright fridge also doubles as a handy prep space – the Rambler Vehicles team really have thought of everything.

Underneath the Spinifex canopy you find a massive 70L water tank and pump that has been plumbed to the rear of the vehicle for easy access. While we’re down there, there is also a pair of handy lockable tool boxes, a rear utility hatch and a pair of upgraded LED tail lights.

Access to the top of the canopy is simple thanks to the rear-mounted ladder, and once you’re up there you’ll find another Rhino Rack platform, and a huge 270-degree Bush Company 270XT awning.

Finishing off the canopy are a swag of handy LED camp/work lights that make life around camp a little more manageable after the sun has called it a day.

We asked Kaz about here experience with Rambler Vehicles, and if she had any words of wisdom to offer other potential buyers.

“Just go for it! Kris and Shai really know their stuff and his advice was spot-on, even when he was telling us things we probably didn’t want to hear. You will not regret letting these guys transform your vehicle”!

Sounds like a ringing endorsement to us! Check out the contact form below to find how you can turn your dreams to reality with your very own Rambler Vehicles build! 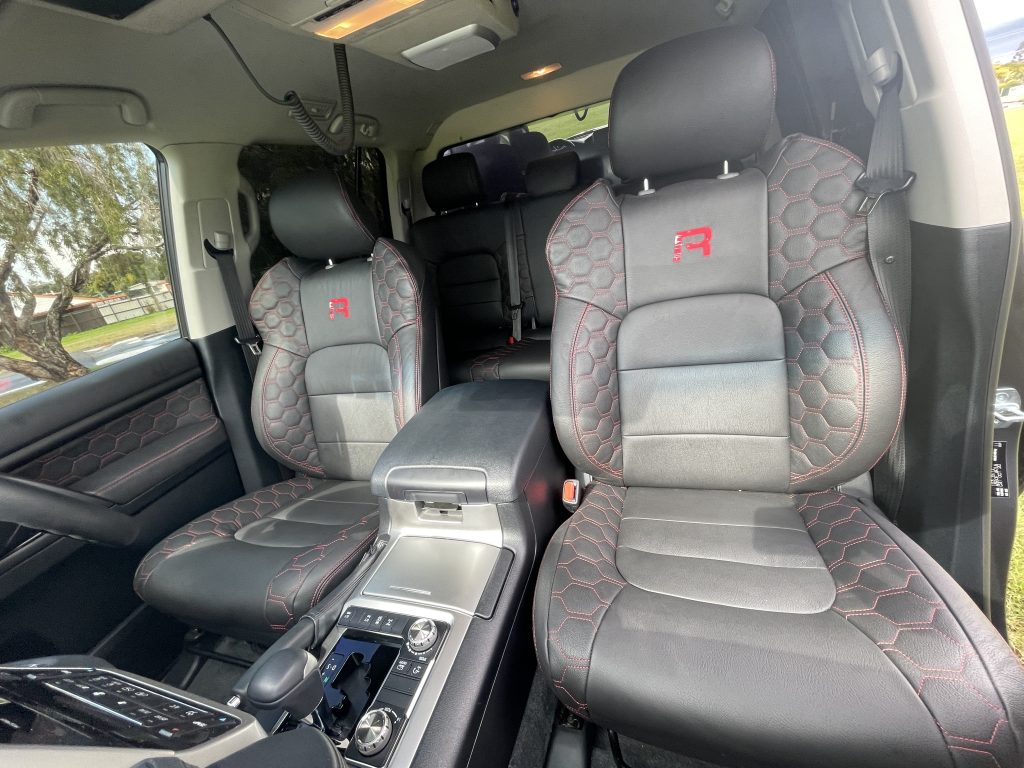 If you’re anything like us, you don’t mind the odd big day behind the wheel, putting as many kilometres between you and the big smoke as possible. Daz and Kaz have a themselves a cracking place to rack up those kilometres, too!

The standard 200 Series seats are good, but with the Rambler Vehicles treatment, they are now great! They have copped the Sports Seat treatment, which includes building up the bolsters for more support, and for a touch of class, they’ve been topped off in beautiful nappa leather with red stitching courtesy of Adam and the team at Carmens Auto Upholstery

Keeping the road noise outside where it belongs a full complement of Dynamat insulation, and 3D floor mats make for an easy clean up at the end of the trip.

There are plenty of other added goodies too, like the Department of the Interior roof console that houses the GME TX4500S UHF Radio, along with a few additional power outlets. Another addition that is slightly less subtle is the huge Alpine multi-media head unit that measures a whopping 9in, and it married up to a set of Alpine R Spec speaker, sub and amplifier – perfect to drown out what little road noise may be left in the cabin of the 200 Series Dual Cab!

The finishing touches include a rear-view mirror reversing camera that can also be switched to a camera mounted to the rear of the caravan, and a Telstra CelFi Go mobile signal booster has been placed neatly behind the rear seats. Oh, and to keep the inside comfortable on even the hottest days, quality ceramic window tint his been installed throughout.

One of the big drawcards of the mighty Toyota Land Cruiser 200 Series is the fact that it comes with an incredible engine – the much lusted after 4.5L twin turbo diesel V8 that is a cracking motor for towing and cruising in comfort. However, the Rambler Vehicles team firmly believe that the only thing better than loads of torque and power, is even more torque and more power! To set things right the team used their tried and true method that has been applied to countless builds over the years. It starts with a huge intercooler upgrade to a very impressive looking PWR alloy unit, with a pair of huge  thermos fans to draw as much cool air through the system as possible. The result is that the V8 can be re-tuned to deliver more fuel and run more boost, while maintaining lower exhaust gas temperatures for added reliability. Yep, it’s a bit of a “have your cake and eat it too” scenario.

The Safari Armax we mentioned earlier in this yarn isn’t just for show, it does a stellar job of providing cold, clean air to the Legendex air box under the bonnet, again, allowing for more cold, dense air to be delivered. Legendex were called on once more, this time to provide a sweet-sounding stainless steel exhaust system. The finishing touches to the power-up is a full re-tune of both the engine and transmission ECU’s, done of course, on the dyno to maximise the power and efficiency. And speaking of the transmission, an upgraded transmission cooler has been fitted as an added insurance policy. Keeping it all safe and sound from stray rocks and road debris is a full complement of stout Brown Davis bash plates that would probably survive a bomb blast!

There is an old saying in the modified 4×4 world, that one modification often leads to three more, and let’s be honest, a lot of weight has been added to this vehicle. In order to keep it safe and legal, the vehicle’s GVM (Gross Vehicle Mass) has been upgraded to a huge 4,200kg thanks to the team at ASG 4×4. This was achieved with a 4in suspension lift kit from the good folks at Superior Engineering, and it is certified legal throughout Australia. A Poly Air air-bag system has also been added to the rear to help keep things nice and level when towing.

The additional space under the wheel arches afforded by the lift kit meant that a set of 35in Toyo RT tyres could be fitted, and these have been mounted on a set of Method alloy wheels.

Lastly, to help ensure that he big days behind the wheel are not interrupted with a dozen fuel stops, the Rambler Vehicles team fitted up a replacement Brown Davis long-range tank, meaning that Daz and Kaz can safely carry an eye-watering 270L of diesel, giving them a conservative touring range of around 1,800kms. That’s like going from Brisbane to Melbourne without needing to refuel. 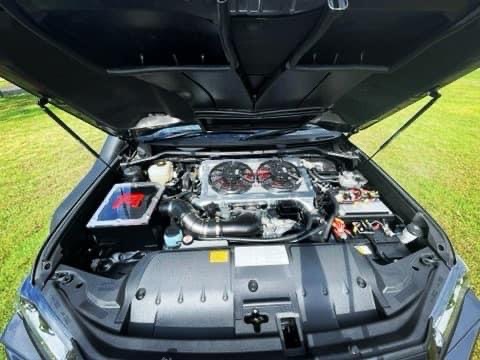 Just like it is with a lot of the builds that Rambler Vehicles complete, there are a host of other goodies that do not necessarily become obvious at first glance. Take the bonnet upgrade for example, it looks more like the bonnet you’d find on a 70 Series Land Cruiser.

Hidden away from prying eyes is a new TJM heavy duty compressor, which is coupled to a very handy retractable hose reel for quick and easy tyre inflation.
Helping the Takken’s keep abreast of what is going on in the world is a Sphere RV WiFi booster, complete with GPS tracking, and another addition you would surely miss is the ERPS rust protection system that has been fitted throughout the rig.

Head to our socials to see more great Rambler Vehicles builds and many other vehicle platforms like the 70 Series, DMax, Hilux and more! Request a call back below!